Getting down the aisle – 8 different ways 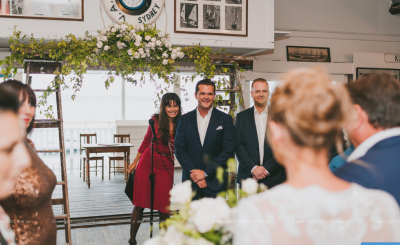 They say there are many ways to Rome, and up until recently, there was only one traditional way down the aisle, and that was on the arm of your father.

In fact, once dad and his lass would arrive at the end of the church, they would be greeted by the minister and her future husband and be asked something along the lines of “Who gives this woman away to marry this man?”

For the record, in the hundreds of marriages I have officiated as a Sydney celebrant over the years, I have NEVER asked this of any parent. What I have asked for is a blessing – often from both sets of parents.

Fast forward into this century, and we are starting to see many alternatives.

In the spirit of equality and in honour of the fact that the bride developed in her mother’s womb, this is becoming a popular choice.

Up until recently, mum would only walk her daughter down the aisle in the absence of the bride’s father

This is one of my favorites irrespective of whether the bride has been married or not. It’s a beautiful way to include children in the ceremony as well.

On a few occasions, this has happened when mum and dad have been unable to attend the wedding or when the bride is not so close to her family.

This is a choice that is becoming more and more popular. In a time when most couples are already living together before they get hitched, for many, it makes sense to make a grand entrance together. On occasion, they have even boogied down the aisle together.

That awkward moment when you need to decide between 2 men that have both played a key role in your life becomes non-existent when you ask them both to accompany you.

This tends to happen when both the bride and the groom prefer to have little fuss made and prefer a more relaxed start to proceedings.