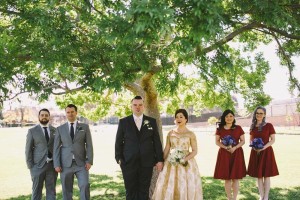 As someone who is inspired by the concept of love, it’s a topic that I talk and write about often often, especially in my role as a Sydney wedding celebrant.

Like millions of other people in the world, I was predictably interested in seeing the ceremony when Prince William tied the knot with the former Kate Middleton and the current Catherine of Cambridge.

As inspired as I am with the concept of Australia becoming a Republic, a royal wedding still pikes my interest especially as the last one that held any significance for us Aussies was 7 years ago when Mary Elizabeth Donaldson became the Crown Princess of Denmark.

Given that the ceremony was in Danish and the only thing Mary was required to utter was a single Danish yes at one point in the service, I was particularly looking forward to hearing (and understanding) the words during William and Catherine’s ceremony.

As much as I’m not a huge fan of church weddings, admittedly there have been a handful that I’ve attended that have been quite beautiful. Theirs was certainly one of them.

The choreography of the service, which included prayers and a reading from Catherine’s brother, was seamless. After hearing of the number of rehearsals that they had prior to the day, I would certainly hope so.

One thing that stood out for me was hearing the priest declare ‘that every wedding is a Royal Wedding’. Bravo! I could not agree more.

A religious service in a church has a beautiful effect but anyone that has been part of a ceremony that had the rainforest, a park or a beach as the backdrop knows that Mother Nature is certainly majestic in terms of providing an amazing backdrop.

Whether it’s a wedding ceremony that is civil, religious, casual, beachy, formal or traditional, every wedding represents the notion that the bride and the groom are like the queen and the king of their party that celebrates their love and commitment to each other.

As a celebrant, I’d like to think that my role is important enough to be deemed stately in the most relaxed of ceremonious ways. Perhaps I should start wearing longer robes..