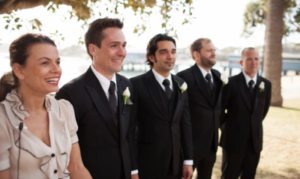 There’s an old adage that states ‘3 times a bridesmaid , never a bride’ and if I subscribed to this notion, I’d have plenty to worry about as I have been a bridesmaid a whopping 6 times.

As a celebrant I often see the dynamics between brides and their bridesmaids and I can’t help but notice a shift in the last few years. Bridesmaids seem to be more empowered than they have been in the past and I can’t help but wonder if as a society, we are a little more conscious of trying to avoid the negative bridezilla tag?

One of the general trends that seem to be emerging is that couples are choosing to tie the knot when they’re a little older than they have been in previous years. A bride is likely to have a few more career and relationship successes under her belt and although her wedding is a special day, it’s not the only key defining moment in her life.

As their friends are marrying a little later in life, chances are that bridesmaids have probably already worn a dress or 2 they didn’t like. The likelihood of buying a dress that they will never want to wear again is a fashion trend that went out long ago but also seems to be a boundary firmly in place in this day and age. The issue of whether the bride or the bridesmaid foots the bill for the dress still remains undecided and for many comes down to cultural differences.

After watching Prince William marry Kate now Catherine of Cambridge, many commented on her sister Pippa stole the show. There is in fact a Facebook page dedicated exclusively to her derriere. The fact that Kate had no qualms whatsoever with her sister looking her best shows what a confident self assured woman she really is.

Interestingly, a bridesmaid doesn’t always represent the bride anymore. At times she can be part of the crew for the ‘groomsfolk’ or a ‘groomsmaid’. In keeping with the theme of equality it should be noted that close male friends are also likely to be seconded as ‘bridesmen’ or ‘bridesfolk’. I wonder what the process is like when choosing outfits. Personally I think it sounds like greater fun. Click here to read the article I was quoted on recently.